The origins of ZEUS

ZEUS was born from a group of friends in 1984, amidst the enthusiasm and drive to exchange experiences in the fields of design, fashion and art, with the aim of sharing individual ideas and mixing them up, contaminating each other’s. A team of young designers not fully on board with the coloured and striking postmodernism found more ground in the philosophy of a synthesis design: the Zeus group started offering minimalist furniture that was black and chic. 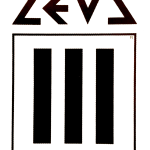 They chose ZEUS as their name, the divinity par excellence, with a deliberate bit of arrogance, thus creating an iconic, recognisable brand: a square containing three bars (fashion – art – design),

topped by an eye-catching logo; all of it black on white. The first products also shortly followed: the fashion collection, ad hoc drawn fabrics, series of neckties, t-shirts with their logo in different variants… and at the same time three chairs, a table and a bench, drawn with a PaperMate felt tip pen by Peregalli in the early days. The ZEUS group, with an attitude that would be defined as ‘understatement’ today, became the author of everything: the graphics, design, art, fashion being sold in the via Vigevano shop were all theirs. It was the year 1984.

The Via Vigevano showroom

Since the very beginning, ZEUS has its own showroom, a shop designed in complete freedom without the intervention nor the advice of an external figure, as the brains behind it is Maurizio Peregalli, who personally realised it and furnished it.

The temple in via Vigevano becomes immediately a unique and inevitable landmark of avant-garde and minimalist design, functioning as an exposition and communication space as well as a meeting point for designers and artisans.

In 1985, ZEUS proposes the first design collection by Maurizio Peregalli with the “Archetipo” products: Sedia (Chair) – Tavolo (Table) – Poltroncina (Little Armchair) – Savonarola – Panca (Bench) whilst hosting the exhibition DEA, Design Europeo Anteprima (Preview of European Design), dedicated to artisanal production: more than twenty designers present their prototypes to the Milanese audience at the Salone. This proves to be a winning combination to fascinate the press and the insiders, allowing for the creation of what will become the Milanese “off” milanese, a European, soon enough international showcase of the design revolving around the Salone del Mobile.

At the time, ‘Fuorisalone’ did not exist, and it was the first time (with the due exceptions) that a young company exhibited their own work within their own showroom.

A party was organised, subsequently named ‘All Night Long Party’, held on Saturday nights. No inauguration, just word of mouth mixing along with all the party ingredients: crowds of fans would form some sort of parade in the adjacent streets to arrive to ZEUS’ courtyard. Everyone saw, ate, drank, and amongst them, some big design names and resellers, brought along by their fascination with this new movement. The Fuorisalone, yet to be created, was born.

The presentations ‘Together in September’, set up by ZEUS at the same time around Salone del Mobile have been held for years, remaining the true essence of the party, a real must. And not just in via Vigevano: in 1988, together with One Off, Quartett, Neotu and Disform, ZEUS organised parallelly an exhibition in the old industrial complex of Ansaldo, area that is now home to the Base Museum in via Tortona.

As the years went by, ZEUS kept growing, and in 1995 it moved to a different industrial complex, an old garage. The space strikes for its dimensions and for its 1950’s architecture, becoming the new 1000 sq m showroom a stone’s throw from the Navigli district, the beating heart of Milan.

In the last decades, the Blue Garage has become a place for exhibitions, communication as well as a meeting point for ZEUS and all the other brands that align with ZEUS’ philosophy to present the news, to host clients, visitors and friends, so that they can appreciate a way of understanding and making sense of design that is not too far from what already existed back in 1984.